When the artists started moving in, five decades ago, TriBeCa was a winsome village of empty warehouses and forsaken loading docks. A few artists, like my own sculptor father, are still in their lofts, making work. But the neighborhood has long since transformed into a bustling hive of boutique hotels and high-priced condos. So it’s strange, and a little magical, to see it suddenly filling up with galleries — with three more opening in just the last two weeks and about a dozen participating in last week’s Tribeca Gallery Walk, a biannual tour experience and mini-festival founded by the art fair Independent New York.

Andrew Kreps and James Cohan have just moved down from Chelsea, joining the earlier transplants Bortolami, Alexander and Bonin and Postmasters, with PPOW scheduled to follow in the spring. Canada and the newcomer Denny Dimin have moved from the Lower East Side, along with Kerry Schuss, returning to his original Leonard Street location.

Ales Ortuzar is introducing New Yorkers to artists who’ve made impacts in other parts of the world at Ortuzar Projects on White Street, and the Journal Gallery, formerly based in Williamsburg, Brooklyn, has been mounting a new show every week just down the block. Kaufmann Repetto of Milan, in partnership with Kreps and Bortolami, is now operating a space on Walker Street, and the tiny independents Page and Queer Thoughts are running consistently interesting programming out of a couple of office buildings on Broadway.

Rent hikes in Chelsea are one reason for the migration. Online shopping is another. The decline of in-person retail has left the Triangle Below Canal Street studded with expansive storefronts that are often cheaper, per square foot, than elsewhere in Manhattan. But as Lucas Page, of Page gallery, puts it, the neighborhood is also a “sweet spot,” with a “rich history of art” and subway trains “feeding from every borough.” And unlike Chelsea, which sprawls to the far West Side, Andrew Kreps says, TriBeCa “feels like it’s part of the city.”

Stay on top of the latest in pop and jazz with reviews, interviews, podcasts and more from The New York Times music critics.

Below are four of the best shows up right now in TriBeCa — but you’ll find more than a dozen others within a gentle stroll of the Franklin Street stop of the No. 1 train. 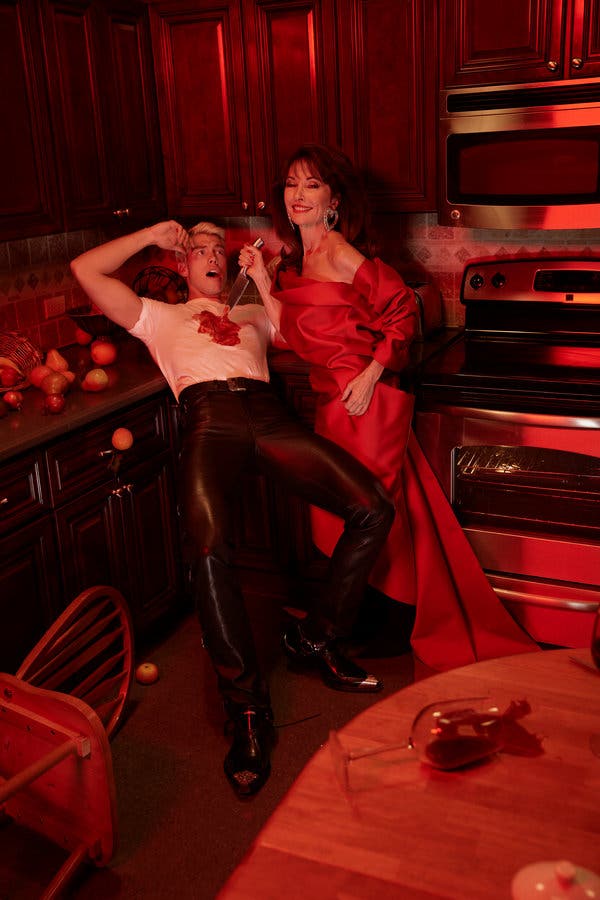 Roe Ethridge’s ninth show with Andrew Kreps Gallery, “Sanctuary II,” includes a photograph of the actress Susan Lucci pretending to stab a male model, which Mr. Ethridge shot while working on a magazine profile; another image of a handsome youth tossing a football, produced as part of a fashion campaign; and an earnestly lovely portrait of a postcard-perfect white duck sitting atop a ripple of reflective water. But the one I can’t seem to forget is a head-on view of a half-empty squeeze bottle and a few vague spears called “White Asparagus and Ketchup.”

A Heinz ketchup bottle, in a contemporary art context, must always refer to Andy Warhol, that son of Pittsburgh who famously appropriated his hometown company’s “57” logo. White asparagus brings to mind Dutch still life, as well as pointing to the intractable ambiguity of even the crispest photograph, since it’s so hard not to read these particular examples as French fries. The whole thing looks so much like an argument, about the artistry of advertisements, the mercenary quality of the art world, or the difficulty of telling them apart. But the more I think about it, the more the work’s self-consciousness seems like just another aesthetic choice, just one more tool, like color or composition, that Mr. Ethridge can use to make a beautiful picture. 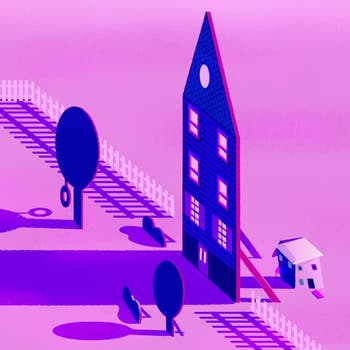 Wait a Minute. How Can They Afford That When I Can’t? 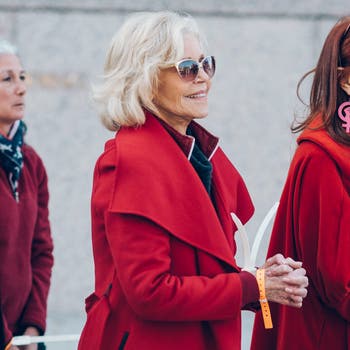 Jane Fonda at 81, Proudly Protesting and Going to Jail 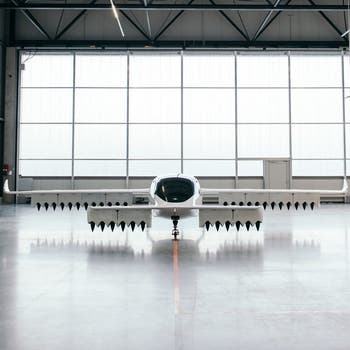 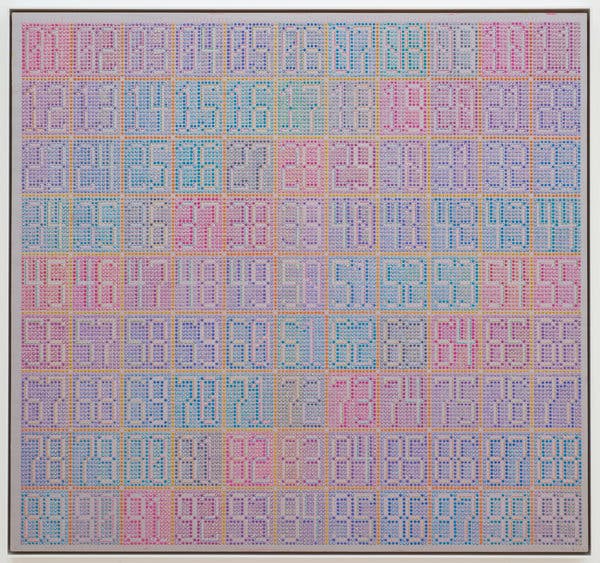 Xylor Jane starts her paintings with numbers. To set up the formulas that govern her complex concatenations of colored dots and triangles, the California-born artist might draw on alchemy, the I Ching, or higher-order primes — or she might not. The thousands of tiny, nipple-shaped dollops of paint in the pink and blue oil “No More Tears” depict nothing more complicated than a table of whole numerals from 1 to 99. Unlike a pointillist’s dots, though, or the pixels on a computer screen, Ms. Jane’s careful marks refuse to fully subsume themselves into the overall pattern. More striking than the table of numerals itself is the vibrant glow of its chromatic dissonance. You’re reminded that any visual synthesis you think you’re seeing is only in your head — but in the very same thought, you’re assured that that doesn’t make the vision any less remarkable. 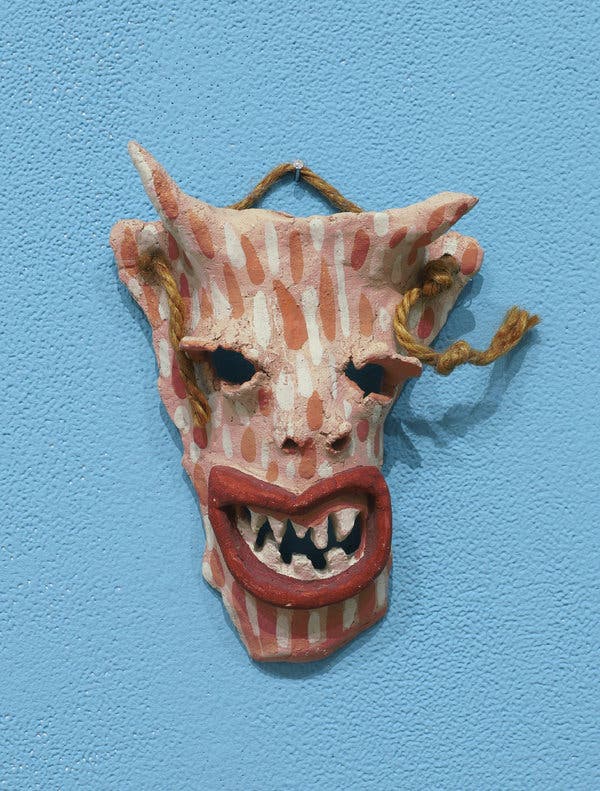 Moki Cherry made all kinds of art, most famously the colorful backdrops for performances by her husband, the jazz trumpeter Don Cherry. But she spent the years 1992 to 1997 at Greenwich House Pottery, in the West Village, making motley animal-shaped vessels, vessel-shaped animals, and ceramic demon masks — nearly all of which are included in “Moki Cherry Ceramics & Collages,” organized by Bob Nickas at Kerry Schuss.

In the masks, especially, an inspired combination of precision and roughness lays bare the constant contest between an artist’s idea and the strange, chaotic resistance of her material. Details like an adeptly shaped canine tooth, or adobe-colored teardrops, come to have a supernatural charge, as if they’d thrown themselves into existence fully formed. Teeth folded out like tabs of paper, or eyes slit open like hot cross buns, direct that same charge outward, making a viewer suddenly conscious of how weird and miraculous it is to experience the world in a body. 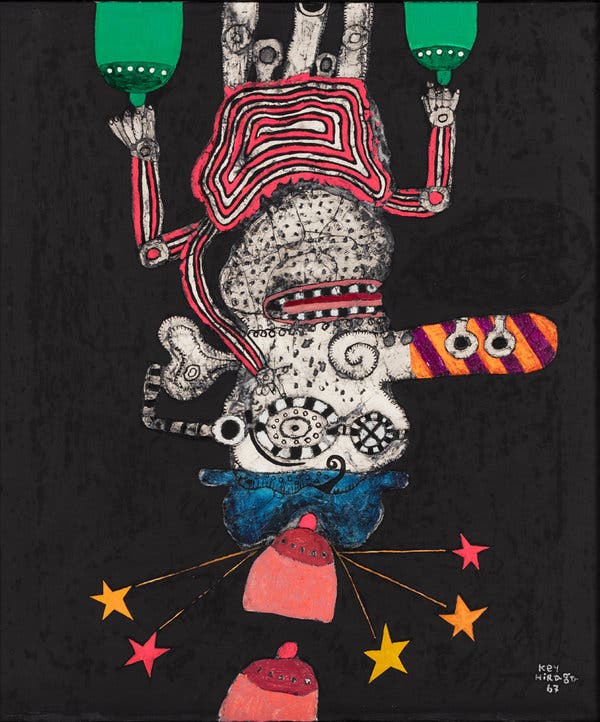 A self-taught artist who spent the 1960s in Paris and the rest of his life (he died in 2000) in Japan, Key Hiraga liked to paint an electric-mauve menagerie of vulvic eyeballs, googly-eyed sperm, cartoonish bowler hats, and serpentine penises with teeth. It sounds like dorm-room depravity, and in some smaller pieces in his show “Works 1958—1993,” it does come across that way. In larger paintings, though, the sexual monomania transcends itself and flips over into an enthralling, almost innocent exuberance. I tried to count the split and doubled faces, and splayed-open carnal conjunctions, in “The Elegant Life of Mr. H,” but their sheer quantity overwhelmed me: All I could do was marvel at the piece’s bright colors and explosive sense of motion.